Here's a video and some excerpts from a newspaper article reviewing a show we did a couple weeks ago at the Pearl River Library.
The Sound of ("American Roots") Music Comes to Pearl River
The Homegrown String Band performed to a full room on Sunday at the Pearl River Public Library . . .  From the very start, Rick “Rooster” Jackofsky held the crowd’s attention with his natural storytelling ability and encyclopedic knowledge of the history of American roots music. Georgianne, Erica and Annalee had the crowd clapping along to their down-home style of Appalachian clog and buck dancing . . . “What a fantastic show!, I love that they are a family performing together as a unit. It’s wonderful" . . . "When I heard that they were performing at the Pearl River Public Library, I knew we had to go,” . . . One of the many stickers that adorn Jackofsky’s well-traveled guitar case is a quote from Jimi Hendrix: “Knowledge speaks but wisdom listens.” And, people listened, intently.
By Rose Croke, The Pearl River Patch  (Read the full article)

The Homegrown String Band
Posted by Rick Jackofsky at 3:38 PM No comments: 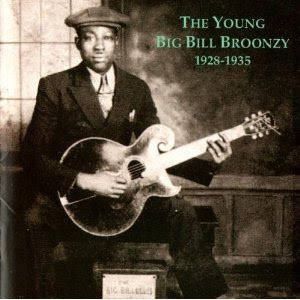 Big Bill Broonzy was born on June 26 somewhere in Arkansas in either 1893,1898, or 1903. His sister cited the earlier dates, but according to research by his biographer, Bob Reisman, the later date is the correct one. Either way, today Big Bill "Key to the Highway" Broonzy would be well over a hundred years old. After serving time in the Army during WWI, Bill headed up the Mississippi to the bright lights and big city of Chicago. Broonzy, along with his friend and musical partner Tampa Red, was a prominent figure in the pre-war Chicago blues scene formed by and for the relocated southern blacks who migrated up the Mississippi in search of a better life. They say Muddy Waters discovered electricity, creating the first modern electric blues combo, but Big Bill was probably the first Chicago blues man to incorporate electric guitar and drums into a blues ensemble. Big Bill Broonzy represents the musical link between rural bluesmen like Charlie Patton, Robert Johnson, and Son House, and the post war urban blues of Muddy Waters and Little Walter. Broonzy was the last minute country blues substitute for Robert Johnson, who disappeared shortly before the show, at John Hammond's famous 1938 Carnegie Hall "Spirituals to Swing" concert. Big Bill passed on August 15, 1958, at the age of 55, 60, or 65.

I Feel So Good: The Life and Times of Big Bill Broonzy

Posted by Rick Jackofsky at 12:52 AM No comments: 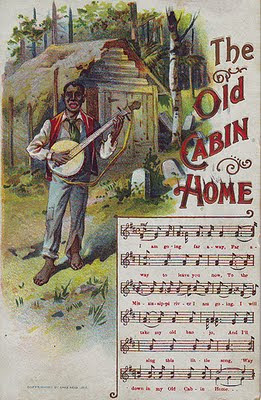 For the last one hundred and fifty years the banjo, along with the log cabin and the "Sweet Sunny South," has been a symbol of a mythical simpler time and place. The banjo, introduced to America by African American slaves, represents the evolution of a North African stringed instrument called an Ankonting. During the mid-nineteenth century, the banjo was often shown in the hands of a "happy, carefree" slave. Later, the symbol of a time left behind would become the barefoot, banjo playing, hillbilly, mountain man. Many sentimental country and folk songs have been written about log cabins, including Fiddlin' John Carson's 1923 Okeh release "Little Old Log Cabin in the Lane." "The Little Log Cabin" 78 rpm backed by "The Old Hen Cackled and the "Rooster's Going to Crow" was such a huge, and surprising, success that it led to northern record companies setting up field recording sessions around the south, scrambling to find more hillbilly old time music. This postcard dated 1908, found in a Connecticut antique shop, makes use of  two nineteenth century stereotypes—the banjo playing slave and the log cabin—to depict a purely fictional pastoral setting that people beset by life changing technology and "progress" have been longing for since the beginning of the industrial revolution.


For more reading on the social history of the American banjo:
That Half-Barbaric Twang

America's Instrument: The Banjo in the Ninteenth Century

Posted by Rick Jackofsky at 4:15 PM No comments: 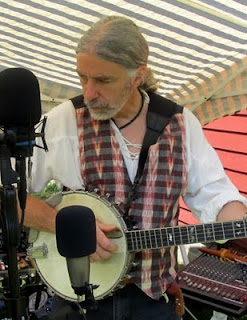 For some reason it seems that banjo players have always had a fascination with murder. Is it because they are constantly being threatened with the possibility of meeting an untimely end, or maybe they are just a morbid group, who knows. In any case, solo clawhammer banjo and vocal seems to be the way to go when it comes to murder ballads. On July 29, 1927, in Bristol, Tennesee, at the same recording session that would launch the careers of The Carter Family and Jimmie Rodgers, a banjo playing barber from Kentucky named B.F. Shelton recorded four tunes including two classic murder ballads. He chose the cheery "Pretty Polly," an Americanized version of the English murder ballad "The Cruel Ship's Carpenter," and the All American moonshine murder ballad "Darling Cora."  Doc Watson's neighbor, Tom (AKA Clarence) Ashley, recorded "Little Sadie" and "Naomi Wise" in 1929. The list goes on and on with murder ballads being prominently featured in the repertoires  of many early banjo players including Samantha Bumgarner, Dock Boggs, Bascom Lamar Lunsford, and Buell Kazee. I've kept up the tradition by including "Pretty Polly," "Darling Corey," "John Hardy," and "Little Sadie" in my solo performances.

Several years ago I decided to write a new murder ballad, God knows there is no shortage of dastardly deeds to tell a terrible tale about. I decided to compose my murder ballad based on a murder that took place in Berlin, NY, in 1845. This was a time when banjos were just beginning to be manufactured commercially and the instrument of African origin was gaining popularity in mainstream America. I found the grisly details, along with a 24 verse broadside that was hawked at the execution of Henry G. Greene, in "New York State Folktales, Legends and Ballads" by Harold Thompson. Greene, who murdered his wife of one week, Mary Wyatt, with a lethal dose of arsenic, confessed to his terrible crime only after being found guilty and sentenced to hang. In a final act of repentance, Henry sang "Rock of Ages" as he stood upon the gallows. I borrowed some verses from the broadside, added some of my own along with a spooky sounding minor tune, to come up with my version of The Ballad of Mary Wyatt.

Listen to The Ballad of Mary Wyatt by Rick Jackofsky

Buy the Mp3 or the book

The Ballad of Mary Wyatt

Photo by Ed Neale
Posted by Rick Jackofsky at 9:56 PM No comments:

Looks like tomorrow is going to be a rainy Sunday afternoon, but that doesn't mean it has to be dreary. Don't stay home and watch Rainout Theater! Come on out to the Pearl River Library at 80 Franklin Avenue in Pearl River, NY and enjoy a great performance of traditional and original song and dance, by the Homegrown String Band. 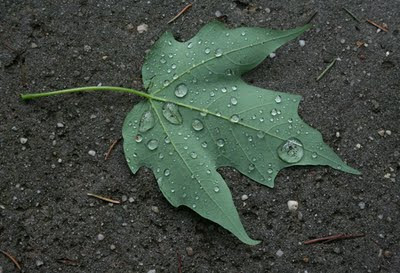 In 1761 John Edwards settled in Sayville and built a house at what is now the corner of Foster Avenue and Edwards Street. On Sunday, June 5th, 2011, from 1:00 - 4:00 the Homegrown String Band will be performing two sets of acoustic string band music on the grounds of the old Edwards homestead as part of the annual Edwards Farm Day celebration. Come on down to the farm and help us celebrate the 250th anniversary of Sayville.

"An afternoon on the Edwards Farm . . . will feature hands-on activities including quilting, grinding corn, making ice cream, and seed planting along with baby farm animals, spinning and weaving demonstrations as well as the Homegrown String Band. To help defray expenses, admission is $4.00 per person, $15 for a family of four, $2.00 each additional person over 2 years of age."
Posted by Rick Jackofsky at 11:26 AM No comments: