I've been playing music most of my life. Over the years I have performed in dozens of blues, rock, jazz, and country bands.  The only band I've been a part of that has lasted more than two or three years has been the family band, The Homegrown String Band. Over the past fourteen years we have performed somewhere around 800 shows. Though our first public performance was January 1997, the band goes back a few years earlier to the early 1990s. It's hard to pinpoint exactly when the family became a band, was it when Erica started to play violin in 1993 at the tender age of nine? Or was it when Erica, Georgianne, and I first sat down and played as a trio? I think the genesis of The Homegrown String Band was when I gave Georgianne a mountain dulcimer as a fifteenth wedding anniversary gift in 1994. Georgianne and I worked out a small repertoire as a duo and soon Erica and Annalee were joining in on fiddle and jaw harp. Now, nearly two decades later, we are still having fun making music together as "The Family That Plays Together." I guess the family that plays together really does stay together! In a testament to our resiliency and longevity we were recently mentioned, along with The Scruggs Family, The Del McCoury Band, and  Cherryholmes, as examples of families carrying on the tradition of making folk music together in Stephanie Ledgin's book Discovering Folk Music. We're bona fide! 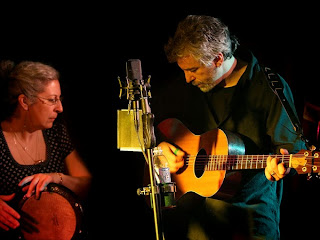 This week we will not only be performing as a family (in the Belcher Auditorium at the Ridgewood, NJ Library Sunday, November 21 at 3pm), Georgianne and I will also be getting back two our roots; performing as the duo Homegrown Two, at The Folk Music Cafe at the Mountain Side Library in Mountainside, NJ. on Thursday, November 18th at 7pm. If you are in the NJ, PA, NY area try and catch one or both of our shows. If you are a performer who would like to share the bill with us come on down to The Thursday night show at the Mountainside Library Folk music cafe where there will be an open mic between our two sets.