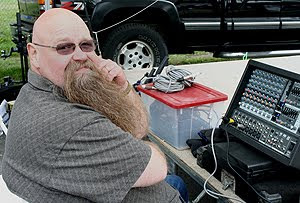 This weekend we will be doing six sets, three each on Saturday and Sunday, at The Hudson Valley Garlic Festival. We (The Homegrown String Band) look forward to this festival all year! Everything about it (music, food, crafts) is first rate. It is also very professionally run by a great group of enthusiastic  garlic lovers. This year I'm planning on getting enough seed garlic for about a hundred plants. Last year I planted sixty and it looks like we will run out of the stinking rose around Christmas. If you are a garlic lover who has never made the pilgrimage to the HVGF you really owe it to yourself to make the trip. Tens of thousands of people will be enjoying everything garlic; from salsas and pestos to chocolate covered garlic and garlic flavored ice cream! We will be appearing on the Pavilion stage; alternating sets with the talented singer song writer and multi-instrumentalist Mark Rust. I expect we'll see our old friend Bruce the soundman again, too!

Posted by Rick Jackofsky at 8:39 PM No comments:

The Homegrown String Band will be busy this weekend with shows in NJ, PA, and NY. We have two library shows in New Jersey: Thursday, September 16, we will be at the North County Library in Clinton NJ; showtime at 7:00 pm. On Saturday, September 18, we will be  performing in the gazebo at the Catherine Dickson Hofman Library in Blairstown NJ at 6:30 pm. We'll also be appearing at two festivals this weekend. On Friday, September 17, we will be returning to The Pennsylvania Sustainable Living & Energy Festival in Kempton PA where we'll be on the solar powered stage at 4:00 pm. We close out the weekend at The Apple Festival, which takes place at the Sherwood Jaynes House in Setauket NY on Sunday, September 19. We'll be there all day sharing the stage with our friends Larry Moser and Mary Nagin. The festival runs from 12-4 pm. 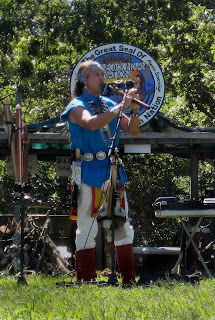 Georgianne, Annalee, and I headed out east this morning to check out the 64th Annual Shinnecock Indian Pow Wow.  When the kids were younger we used to go every year, but with all the Homegrown String Band touring it's been several years since we last attended. We strolled around the grounds admiring the crafts and grabbed a bite to eat. There were some very interesting foods available; like buffalo, venison, and wild quail. We settled on Indian frybread tacos mostly because the line was short, but they were quite tasty. The traditional Aztec dancers and competitive fancy dancers are always fun to watch, but for me the highlight of the day was a performance by fiddler/flutist Arvel Bird. Arvel, of mixed Native American and Scottish descent, successfully blends his cultural heritage in his music. He seems equally at home playing a Celtic or traditional American fiddle tune as he is playing Native American flute music. Bird has released numerous genre bending recordings and won several Native American Music Awards. He's been performing everyday of the Pow Wow; if you haven't caught one of his sets you have one more chance, his last set will be at 10:45 Monday morning.