The Man Who Dressed in Black

85 years ago today J.R. Cash, The Man Who Dressed in Black, was born in Kingsland Arkansas. 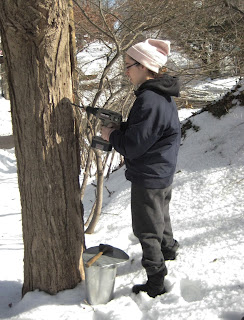 Monday morning Annalee and I tapped seven sugar maples in our yard to kick off my fifth year of backyard maple sugaring. By the end of the week I had collected about 25 gallons of sap, so Friday was my first day of boiling.

Friday February 17, 2017 - Day 1, Year 5:
Cold and clear at 6 am in Rocky Point. At 25 degrees with 15 mph winds, wind chill 14, and 8 inches of snow still on the ground, it was a Frosty Morn' for sure. I got started around 6:30 and had a good boil going by 7 am. I averaged about 2 1/2 gallons an hour on my homemade evaporator and brought the syrup in to the kitchen for the final boil around 4:30 pm. They say you should get one gallon of syrup for every 40 gallons of sap, it seems to be more like a 50 to 1 ratio form me, my trees, and my evaporator. I ended up with a little less than a half gallon (7 1/2 cups) of Long Island Maple Syrup from my 25 gallons and ten hours of toiling over the hot stove. 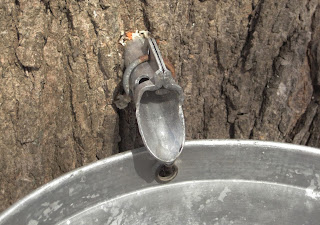 Tuesday February 21, 2017 - Day 2, Year 5
Cold, clear and calm, mid to high 20s at 6:30 am. Disappointing sap flow the last two days, only collected about 2 gallons, but good flow Saturday and Sunday. Today I boiled about 22 gallons of sap in 9 hours to yield 4 1/2 pints of syrup. The weather forecast for the next ten days doesn't look good for sap flow, night time temps are predicted to stay above freezing all week. This year was the earliest I tapped my trees, but conditions were good (nights below freezing, days above) a couple weeks earlier. I hope I didn't wait too long.

Monday March 6, 2017 - Day 3, Year 5
One of my trees started flowing brown sap last week, I pulled the tap and put a second tap in a big tree that was producing well, even so it took nearly two weeks to collect 15 gallons of sap. First it got too warm then too cold. Went out at 7am this morning, all the sap in my buckets was frozen solid. The sap I had in my barrel was encased in about four inches of ice. I manage to get about five gallons of liquid to start my boil and had it all thawed by 11:30. I brought the syrup in to finish the boiling on the stove at 1:30. Six hours of boiling yielded one quart of syrup that tastes a little off, slightly less sweet. Buddy?, or just because some of the sap was two weeks old? Oh well, I pulled my taps today, so I ended up with one gallon plus five cups of syrup including today's iffy batch which will be used for cooking only. I only collected about 70 gallons of sap this year. Although this was the earliest I ever tapped my trees, I was apparently still two weeks too late. Chalk it up to global warming, I guess.

Posted by Rick Jackofsky at 9:13 AM No comments: