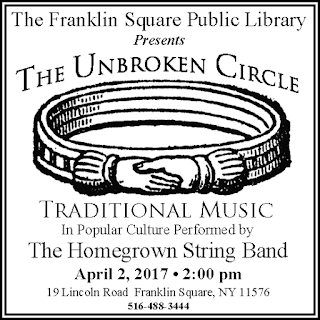 Sunday April 2, 2017, at 2pm, The Homegrown StringBand™ will be performing "their "Unbroken Circle" program at The Franklin Square Public Library. The show will feature original arrangements of traditional tunes that have been covered by: The Grateful Dead, Bob Dylan, Nirvana, Led Zeppelin, and others. Tickets are free. Call the library for more information. 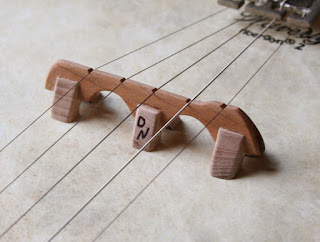 I've been using Don New's barnwood Clawhammer bridges for about a year now. His clawhammer-specific bridges feature a raised fifth string which means that, at about the point where the neck and pot meet, the fifth string is even with the other strings. When I replaced a Snuffy Smith bridge on my Wildwood Troubadour with one of Don’s clawhammer specials I noticed a little more bass response, but what I really liked was the raised fifth string especially when dropping thumb. I liked it so much I ordered another one for my Mike Ramsey fretless banjo. The story should end there, clawhammer banjo player lives happily ever after, right? But recently Don contacted me to tell me about a new design. He calls it “The Bigfoot” and says it’s his best sounding bridge. How could I resist? The one I got has the same, wider "Crowe" spacing, as well as the raised fifth string feature of the “Spillway Dam” bridge I've been using, but the Bigfoot has more open space under the strings. It also has three big maple “feet” attached perpendicularly to the barnwood portion of the bridge. I decided to give it a try figuring if there isn’t a big improvement in the sound I would put the Spillway bridge back on. Well, I was pleasantly surprised, although I shouldn’t have been surprised at all; Don said it would sound better and it did. It has even better bass response and significantly more volume. It also seems to somewhat tame the overtones and even out the response between the fifth string and the other strings. Don goes by the name Stringbean45 on Ebay where he sells his bridges and some other banjo related stuff.

This review was re"printed" from the March 2017 issue my e-newsletter "Rooster Rick's Clawhammer Banjo Gazette." If you are interested in receiving the monthly Gazette contact me at:
rick@homegrownstringband.com

-Rick
Posted by Rick Jackofsky at 2:47 PM No comments: