Barbara Allen, a cut from our new CD "Party in the Henhouse"
Available Early April 2020!

Posted by Homegrown String Band at 11:39 PM No comments:

I guess I didn't post a blog entry about my backyard maple sugaring last year (2019). It was another early year, once again I tapped my trees in January and was done by early March. I boiled sap on three very cold days and ended up with  2 1/4 gallons of syrup. 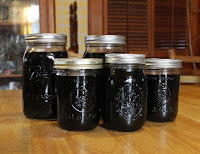 Day 1: This year, my eighth year of backyard maple sugaring, it seemed like winter was never going to get here. I tapped six trees on Friday February 21st, but because of rainy and windy weather, I didn't get out to boil until Monday March 2nd. By then I had about forty gallons of sap collected. I managed to boil down 35 gallons of sap (a new PR) to make 3 1/2 quarts of syrup (also a PR) in eleven hours of fun filled (read back breaking) maple sugaring. I may be getting too old for this. I think two days of boiling will be enough for me this year.

Day 2: Sunday March, 8 Today I boiled down 25 gallons of sap to make a little more than a half gallon of syrup, then I pulled my taps. I only wanted to spend two days boiling this year, turns that's all the sap I got any way. We didn't have very many cold nights this winter. I could have tapped my trees a week earlier and gotten another day in I guess. Total this year one gallon plus three and a half pints of syrup.

Posted by Homegrown String Band at 9:49 AM No comments: