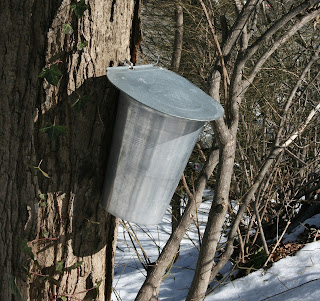 I started my micro maple sugaring project last week with the goal of producing somewhere around two gallons of homemade Long Island maple syrup. Thursday morning I tapped six maple trees, five sugar maples and one red maple. Three of the sugar maples are big, 25-30" in diameter. The big trees have yielded as much as 2 1/2 gallons of sap a day. The smaller trees are ranging from a quart to a gallon a day. By Monday morning I had accumulated about 30 gallons of sap, time to start boiling. You need somewhere  between 32 and 40 gallons of sap to produce 1 gallon of syrup.

Inspired by Rink Mann's book "Backyard Sugarin'", I decided to build a homemade, makeshift evaporator. Rink's philosophy is to use as much Yankee ingenuity and as little cash as possible. I had some old cinder blocks laying around the yard so I used them to build a simple fire pit with a flue in the back. I lined it with gravel and put an 18 x 24 inch oven rack over the front and a piece of slate over the back section helping create draft and giving me a warming shelf. Keeping with the backyard sugaring spirit I decided not to buy a special pan and use a 12" diameter, 6" deep graniteware pot we already had. 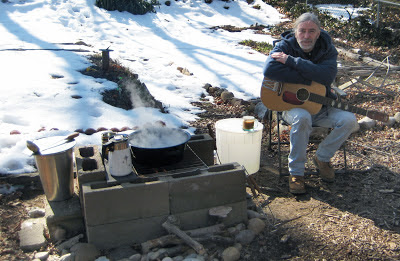 The first day of boiling was not very productive. I started late, about 10 am, and for the first few hours I didn't have the fire hot enough, so the sap was really simmering more than boiling. Even after I got the fire roaring and a good rolling boil going I was only able to cook off about a gallon of water an hour. I ended up boiling down about 6 or 7 gallons of sap and my eight hour day yielded only 2  1/2 cups of delicious, but very hard earned, grade A fancy maple syrup. 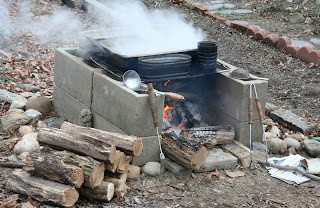 After a pancake breakfast, with fresh maple syrup, I got an early start. By 7:30 am I had a nice hot fire with my 12" graniteware pot and a 6" cast iron pot filled with boiling sap. By lunch time I had already surpassed the previous day's evaporation total, but I was still limited by my available surface area to about 1  1/2 gallons of evaporation per hour. Turns out the formula, which I neglected to take note of, is that you need 100 sq. inches of surface area for every gallon per hour of evaporation. The oven rack was also starting to buckle under the intense heat and the weight of the pans. I guess my lovely wife, Georgianne, took pity on me (actually she was just afraid I was going to quit and she really liked that syrup). She jumped in the car and ran down to One Way Restaurant Supply in Patchogue and came home with two nice stainless steel steam table pans, one 12" x 21" and one 6" X 21". I now have nearly 400 sq. inches of pan space. The rest of the day I managed to up the evaporation rate to 3  1/2 gallons per hour. Now we're cookin'! By the end of the day I had managed to boil down about 18 gallons of sap and make nearly a half gallon of syrup.

Today it's raining, and I only have about 10 gallons of sap collected anyway, so this will be a day for staying inside and making music. Erica is on her way over for Homegrown String Band practice and a taste of the fruit of Dad's labor. Now I know why real maple syrup is so expensive, it is incredibly time consuming to make. The syrup I made, if I do say so myself, is the best I've ever had. Now with my new rig I should be able to boil down 30 to 40 gallons in a day for a yield of nearly a gallon of Rooster Rick's Grade A Fancy Maple Syrup.

I ended up with a gallon and a half of syrup over 4 days of boiling. I never hit that fanciful 30 - 40 gallon a day mark. I think the most sap I boiled in one day was about 20 gallons. My last day of boiling I got severely dehydrated which wiped me out for a couple days. I was also running out of dry wood, so I decided to pull my taps and pack it in for this year. I had a couple gallons of sap left, so I followed a recipe for traditional New England maple beer from Stephan Bruhner's Sacred and Healing Brews. I boiled the sap down to one gallon, pitched in some ale yeast, and let it ferment in a small carboy for a couple weeks. The resulting brew was fairly weak and tasteless. If I try brewing maple beer again next year I'll boil 4 or 5 gallons of sap down to one gallon and then ferment.

Our fabulous fiddle player and resident yarn freak is a finalist in the knitwear designer category of the 2013 About.com Readers Choice Awards.

Posted by Rick Jackofsky at 8:11 PM No comments:

Rooster on the Rooftop

Well, we are finally dug out from Friday's blizzard. The first plow hit our street at about 4 pm on Monday afternoon. Thirty inches of snow and three days of shoveling. Saturday, we dug out two cars, two driveways, the pathways, and the twenty-eight steps leading up to our house. Sunday, I shoveled the snow off our roof. Monday, I dug a neighbor's car out of a snow bank and cleaned up the plow slop. I'm getting used to shoveling, maybe tomorrow I will shovel the whole backyard. Maybe, or maybe I will sit on the roof and play my banjo all day.

Posted by Rick Jackofsky at 5:28 PM No comments:

The Big Snow Makes Our Show a No Go 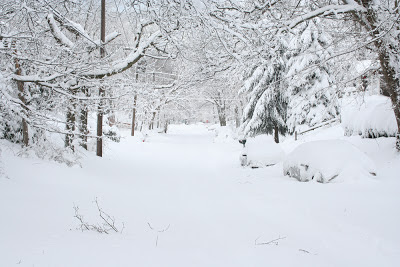 BREAKING NEWS: L.I.E. to close from exit 57 to 73 Sunday 7am to 5pm
"Town of Brookhaven Issues Emergency Executive Order to Keep All Vehicles Off the Roads"

I know we had a lot of snow (30+ inches), but I never thought that our street here in Rocky Point, NY would remain unplowed and major roadways would still be closed 24 hours after the last snowflake hit the ground. Looks like we are going to have to reschedule our show at the Suffern Library scheduled for today February 10, 2013. We have about 30 miles of closed and unplowed roads standing between us and the first patch of dry pavement. We just spoke to Officer Vinny over at the 6th Precinct who advised us to sit tight during this state of emergency.


The Suffern Free Library Show has been rescheduled.
Sunday February 17, 2013 at 1:30 pm
Posted by Rick Jackofsky at 8:05 AM No comments:

Well winter is upon us and Winter Storm Nemo has brought us our first significant snowfall since 2011. We got about two feet of wet sticky snow with drifts over three feet deep. Of course it had to come on the one weekend this month that we have a gig. So, as soon as we dig our van out of the snow, I will dig out my old snow shoveling song, The Snow Shoveling Blues. We'll get that polished up for you, and head up to Suffern, NY for our show at 1:30 pm on Sunday, February 10th, 2013 at The Suffern Free Library. Bring your cold feet and aching backs out to this free show and The Homegrown String Band will warm things up for you with some hot pickin' and fancy flatfoot dancing.