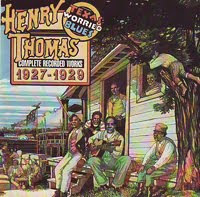 "Rooster" Rick and the "Amazing" Annalee took advantage of a day off and the super high tide caused by Hurricane Bill today and headed down to their fishin' hole, the Long Island Sound. We dug up two old fishing rods, sharpened some hooks, and took the short walk down to the beach. ("Went to the hardware got me a hook, cinched that hook right on that line . . . I'm a goin" fishin' yes I'm goin' fishin' . . . ") I thought we might catch some bluefish, but we each caught a sea robin, which many people consider garbage fish. But I discovered years ago that it is well worth the effort it takes to clean and de-bone these strange creatures. Between the two fish we got a little less than a pound of meat, enough to make four delicious fish cakes.
While we were walking down to the beach the song "Fishing Blues" popped into my head. Most people know the great Taj Mahal version from "De Old Folks at Home" album, but the tune was originally recorded in the 1920s by Henry "Ragtime Texas" Thomas. Thomas, a black man born in the late nineteenth century, was equally adept at country two steps and dance tunes as he was at the blues. His lively dance music gives us a glimpse of the type of music that might have been heard at a nineteenth century African American house party. Dead Heads may be interested to know that Thomas also made the first recording of the Grateful Dead standby "Don't Ease Me In."
Check out "Henry Thomas Texas Worried Blues: Complete Recorded Works 1927-1929" on YaZoo Records. My personal favorite version of "Fishing Blues" is Bruce Molsky's rendition from his Rounder Records release "poor man's troubles." On this tune Bruce shows that not only is he world class fiddler he can also do some pretty fancy pickin' on the acoustic guitar.

Posted by Rick Jackofsky at 1:38 AM 2 comments: 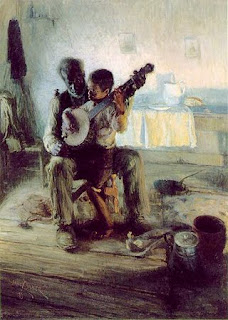 Yesterday I gave a beginning clawhammer banjo lesson. It reminded me of the paradoxes involved in learning to play a musical instrument. Teaching someone how to play a musical instrument is like teaching someone how to ride a bike or drive a car—you have to take something that you do without thought, analyze it, simplify it, break it down into steps, and then help the student reassemble it and develop the muscle memory and confidence that will allow them to perform the task without thinking about it. The beginning student learns the skill by consciously and deliberately reconstructing the process, but it's important to move away from the mindful approach as soon as possible so that technical execution doesn't get in the way of musical expression. A beginning musician has only one approach available to them, that is an intuitive approach. The experienced musician works to acquire knowledge and highly developed fine motor skills only to strive to get back to the intuitive approach of the beginner. So, grasshopper, the circle is complete, the teacher becomes the student.

The Banjo Lesson, 1893. Oil on canvas, by Henry Ossawa Tanner currently on display at the Hampton University Museum.
Posted by Rick Jackofsky at 8:32 PM 3 comments:

Another music legend passed this week. On August 13, 2009, Guitar virtuoso and music visionary Les Paul died at the age of 94. Famous for his duets with Mary Ford and, of course, inventing the solid body electric guitar, Les Paul also changed the way music is recorded and listened to by pioneering the use of multitrack recording. This was the first step in the evolution of music being created in the studio rather than just being captured by a recording device. When electronic recording technology was originally made possible by the Western Electric Company's invention of the microphone, the idea was to replicate the sound of a live performance. Now digital technology, with sampling and audio cut and pasting, has evolved to the point that there is no live performance and musicians performing live strive to duplicate music created in the studio rather than the recording process duplicating the sound of a live performance.

There has been a bit of a backlash to the digital music manufacturing. More and more venues insist on seeing a band perform live, or at least reviewing a live audio or video performance, before booking to be sure they are going to get the performance they want and expect. There is also a movement known as "Real Stereo"  promoting the use of recording music using a "live" 2 mic true stereo process.

So far all of The Homegrown String Band's CDs have been recorded "live" in the studio. We record one or two takes of each song with all of us playing at the same time, but recorded on separate tracks so that the volume and EQ can be adjust to optimize the sound of each instrument. Basically what a good sound man would do at a live performance. In the end I think we usually sound better live than on our recordings because we are more spontaneous and we can feed of the energy of the audience and bounce off each other. There is also less pressure to get it "right," which ironically means we are much more likely to get it right.

However you look at it, Les Paul's innovations have had a huge and lasting impact on the way music is performed and preserved. 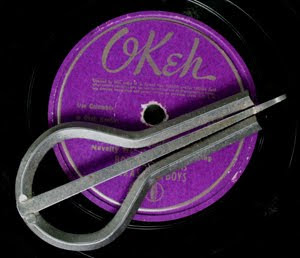 Mike Seeger goes to the West


Last week, while performing at the AFBA bluegrass festival in Wind Gap PA, we had the pleasure of meeting and talking with Laurie Lewis and Tom Rozum. After their set we were back stage chatting and I asked Laurie about a song she had sung that has gone in and out of our repertoire over the years, "Going to the West." I had learned it in 2001 from Joe Herrmann of the Critton Hollow String Band when he and his brother John were house guests in our humble abode. I had often wondered about the origins of the song, but hadn't been able to dig up any historical background. Laurie told me she had learned it from Mike Seeger, who learned it from his sister Peggy, who learned it from a book called "Folk Songs of Alabama." So the mystery was solved, or at least I got a really good clue. Laurie also informed us, and the rest of the audience, that Mike was gravely ill. I knew that Mike had been battling cancer for a long time because when John Hartford passed in 2001 Mike revealed that he was suffering from a similar affliction. During our shows we often tip our hats to Mike and his work preserving traditional American music. During our show with Carlene Carter we made mention of his documentary film "Talking Feet" and told the audience that he had been ill and that we were praying for him. Sadly, after the show Mike Kornfeld of Acoustic Music Scene.com informed us that Mike had passed on Friday night. His passing is a huge loss to the traditional music community. Mike was an amazing musician. He played guitar, banjo, autoharp, jawharp, harmonica, panpipes, and fiddle. He was also an ethnomusicologist who had more to do with reviving interest in old time country music than anyone I know of. He introduced or reintroduced numerous traditional musicians, including Elizabeth Cotton and Dock Boggs, to audiences around the world. Though we never met him we did correspond, and Mike was always supportive and willing to dispense helpful advice. He was best known for his work with the revivalist group known as The New Lost City Ramblers, which he co-founded with John Cohen and Tom Paley in 1958. But it was his solo work that inspired me and served as a model for my early children's shows that in turn inspired my children to become interested in American folk music. I guess there would be no "Amazing" Annalee if I hadn't learned Mike's version of Fooba Wooba John and passed down the fine art of jawharp playing to my daughter. We are so greatfull to Mike for making oldtime musicians and their music available to us. His presence will be missed, but his musical legacy will be with us forever. Mike leaves behind a huge body of work that includes, books and video as well as his wonderful discography of old-time music.

Honorary Members of the Carter Family! 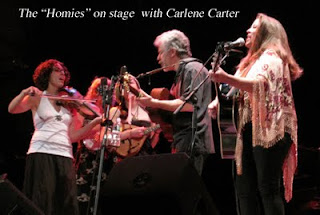 Almost Famous!
The big rain closed out a busy week for the Homegrown String Band. The previous weekend we made our fourth appearance at The Appalachian Fiddle & Bluegrass Association's Annual Bluegrass Festival in Wind Gap, PA. We had a great time despite the mud and rain, but lucked out with great weather for both our sets though it did rain on our flatfoot dance workshop. We always enjoy going back to Wind Gap, reconnecting with old friends and making new friends. This year we were happy to see our old friends Joe and Jamie Booher, whom we had met when we were all performing in Branson, Missouri in 2005. At that time they were performing with their family band, The Boohers. The two brothers are now part of a killer bluegrass band called New Found Road. Check them out! Our Thursday night set went off pretty well, and ace soundman Harry Grant handled our new three mic set up without a hitch. We stayed up till the wee hours of the morning listening to Harry tell some great stories about his bluegrass adventures. No sooner did we finally go to sleep then the rain started, which put a damper on our dance workshop later on in the afternoon, but it cleared out before our Friday night set, which I think was one of our all time best performances.

This past Friday night The Homegrown String Band rocked Argyle Park in Babylon, NY. We did a two hour high energy set for a great audience, as once again everything was clicking for the band. Then Saturday night was a show we had been looking forward to all year: A performance at the Huntington Arts Council's Summer Festival. We had the privilege of opening for country music legend Carlene Carter who is the daughter of June Carter, stepdaughter of Johnny Cash, and granddaughter of Mother Maybelle Carter of the original Carter Family. We were a bit nervous going on before a Grammy winning artist at a world class venue, and also felt a bit rushed squeezing a dance number into a short set, but I think we made a pretty good showing. Our set, which consisted of four original numbers including a tribute to Johnny Cash ("The Man Who Dressed in Black") as well as three trad numbers and the flatfoot demo, was very well received. At the end of the evening Carlene invited us back up to join her in a rendition of the Carter Family classic "Will the Circle Be Unbroken" after which we were pronounced honorary members of The Carter Family! - Life is hard..... but it's GOOD!!!!

Concert Photo by Chris McKay
Posted by Rick Jackofsky at 1:35 PM No comments:

Today we loaded up our 10 instruments, full 4-speaker sound system, and our bad selves to drive 3 hours to Redding CT. We got there an hour and a half before our scheduled start to set up the stage. The sound check was a little tricky as the wood stage was resonating with the lower frequencies. Well, we finally got it sounding just right and played one song when the thunder storm hit. The audience ran—or more accurately, sprinted–for cover and the show was canceled. We dried everything off as best we could in the downpour, packed up, grabbed a quick dinner at Subway and headed home. A lot of work for one tune, but were told it sounded great! At least we got to see our old pal WPKN DJ Chris Teskey.
Posted by Rick Jackofsky at 11:48 PM 1 comment: