Doc Watson, AKA Arthel Lane Watson, passed away today at the age of 89. Doc was born on March 3, 1923, in Deep Gap, NC. Blind by the age of two, Watson used his musical talent to support himself and his family while introducing a new generation of Americans to the traditional music of the Appalachian region. Doc, one of my musical heroes, was "discovered" in the early1960s by Ralph Rinzler who was in the neighborhood to make some recordings of Clarence Ashley. Rinzler asked Ashley if there were any other talented traditional musicians in the area. At the time Doc was playing electric guitar in a rockabilly band; he didn't even own an acoustic guitar. Nevertheless, Doc impressed the visiting folklorist, on a borrowed acoustic guitar, with his repertoire of traditional folk songs and early commercial country music. Doc Watson went on to become one of the most popular traditional artists of the 20th century, and one of the most influential flat picking guitarists of all time.

My first exposure to the playing of Doc Watson was a happy accident. It was 1972 and Doc was the opening act for the Paul Butterfield blues band. I was awed by the playing of this unknown (to me) blind country gentleman. Shortly after seeing Doc perform live, I picked up the, now classic, LP "May the Circle Be Unbroken" and I became more familiar with the playing of this exceptional musician. His album of children's music, "Songs for Little Pickers," provided much of the material I used to entertain, and, hopefully, inspire my children to have a life long appreciation of traditional American folk music. Doc's incredible flat picking was an inspiration to acoustic guitar players around the world, while his elegantly simply banjo technique demystified and provided the foundation for my own clawhammer banjo playing.
Posted by Rick Jackofsky at 10:38 PM 1 comment:

The Twa Sisters, Child Ballad #10, is a supernatural tale of sibling rivalry, karma, and fratricide collected by Francis Child in the latter part of the nineteenth century. Various versions of the story were told and sung throughout the British Isles as well as Scandinavia. This digital video recording of Homegrown Two performing an original arrangement of the classic ballad was made by Paul Essenfeld during our performance at The Windsor Art Center on May 3, 2012.

Next week, on June 2, 2012, Homegrown Two will be recorded using technology that was available at the time Francis Child was putting together his ten volume set of "English and Scottish Popular Ballads." We will be traveling down to Thomas Edison National Historical Park in West Orange, New Jersey, to participate in Edison Day 2012, where we will take part in a wax cylinder recording session using technology from the 1880s invented by Thomas Edison.
Posted by Rick Jackofsky at 12:12 AM 1 comment:

On Sunday, May 20, 2012, at 1:30 pm, The Homegrown String Band will be returning to one of our favorite local venues: The Emma S. Clark Memorial Library. This library, which first opened in 1892, is Suffolk County’s oldest public library in terms of continuous community service from its original location. This is also the site of one of our first family shows; The Homegrown String Band first performed at Emma S. Clark in the summer of 1997. The show is free and open to the public, call the library for more information. 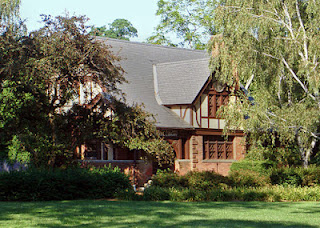 Posted by Rick Jackofsky at 7:03 PM No comments:

This postcard, titled "R. Crumb's diatribe on modern music" by artist/musician R. Crumb, says a lot about the devaluation of traditional culture. Who needs history, shared experience, and cultural continuity? There's an app for that, right? Ironically, the invention of the electronic microphone that began the golden age of recording, the source of Mr. Crumb's record collection, was the beginning of the end of homemade music in many families and communities across America. The easy availability of professionally made music through radio, records, TV, CDs, Mp3s, etc., convinced many musicians and would-be musicians to pack up their fiddles, accordions, and guitars and listen to the homogenized sounds of commercial music. Still, I would have to disagree with Crumb's gloomy conclusion that the beautiful music died with our grandparents. I would say it lay dormant and, though not as ubiquitous as in days gone by, the American tradition of homemade music is alive and well despite the onslaught of mainstream media.

Got a hankering to hear some homemade acoustic American folk music? Come on down to the Patchogue - Medford Library on Sunday, May 6, 2012, and catch the next appearance of The Homegrown String Band, a post modern, neo-traditional old time family string band, America's premier purveyors of high energy acoustic American music. The show starts at 2:30 pm, is free and is open to the public.