We serenaded the early lunch crowd today on the main stage at the 27th Annual Oyster Festival in Oyster Bay, NY. It was windy and cool down on the water front, but downright pleasant compared to the cold, wet, windy conditions last year. I never realized how big this festival was or is. The crowds number upwards of 100,000 each day—nearly a quarter million over the weekend! The music is great (excellent sound—kudos to entertainment director Tim Wright) and lots of delicious food, crafts, and activities going on all day. Try and make it down tomorrow (Sunday, October 17) looks like it's gonna be a great fall day! The Homegrown String Band will be opening the festival with an 11am set, so I guess it'll be oysters for breakfast tomorrow!
Posted by Rick Jackofsky at 5:49 PM 1 comment:

Spontaneous Performance Art Created With a Sonic Palette of Mostly Blues
Walter Tore has been paying his dues, performing great American roots music and traveling the highways and byways of the universe, for the past four decades. His music has taken him across oceans as well as cultural divides. The list of Mr Tore's mentors includes Louisiana Red, Champion Jack Dupree, Lightning Hopkins, and Wilbert Harrison. Walter has learned his lessons well; his music and words flow freely from his soul into the ears and hearts of his audience. Walter began his musical journey as a self taught harmonica player sitting in with blues greats at various NYC venues. Later on, he taught himself to play guitar and fronted his own American roots music band. Over the years his band has included musical luminaries such as ex-Zappa drummer Jimmy Carl Black and Bob Dylan sideman/guitarist Charlie Sexton. For the past six years Walter has been performing and recording spontaneously created music as a one man band. He calls his music Spontobeat and claims to have performed over one million songs. As of this writing you can visit his Sound Click site and listen to or download 2,355 of them. 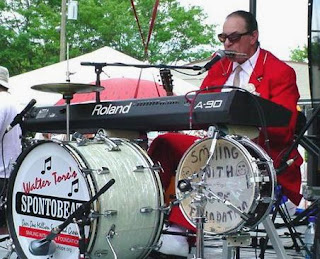 Walter Tore Performs Catch & Release American Roots Music
Spontobeat is a one man show. As a one man band Walter simultaneously plays guitar, harmonica, drums, and keyboards all the while snatching songs from the air, bringing them to life, and immediately releasing them back to the cosmos from whence they came.
Posted by Rick Jackofsky at 3:19 PM 2 comments: