Sunday, October 20, 2013, The Homegrown String Band will be performing a free concert at the Valley Cottage Library. The town of Valley Cottage in Rockland County, NY, was once known as Storm's Corner and was home to the historic Storm's Tavern. The tavern, built in 1765, was a stop on the stagecoach route along the Kings Highway between NYC and Albany. During the Revolutionary War, the Tavern was an important meeting place for the Continental Army and later became a stop on the Underground Railroad. This Sunday, stop in to the library and catch the new old-time music and dance of The Homegrown String Band. The show starts at 2:00pm and runs 'til about 3:30.

Posted by Rick Jackofsky at 4:21 PM No comments:

On Saturday, October 12, 2013, The Homegrown String Band, "the nuclear family that radiates fun," will be performing in a concert setting at the Livingston Public Library in Livingston, NJ. The show starts at 2:00 pm and is FREE to the public. The following day (Sunday, October 13, 2013) Rick and Georgianne will be performing as Homegrown Two: The Duo, at the Bayport-Blue Point Public Library in Blue Point, NY.This show is also FREE.

Posted by Rick Jackofsky at 11:38 AM No comments: 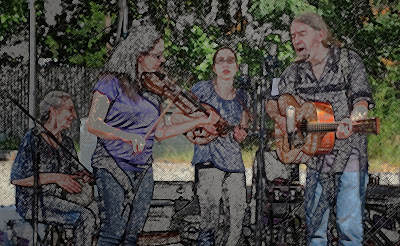 This weekend, October 5, 2013. The Homegrown String Band will be performing two sets, 11:15 am and 1:00 pm, at The Setauket Fall festival on the grounds of the Emma S. Clark Library. Other entertainment will include a "Birds of Prey" demonstration presented by the Sweetbriar Nature Preserve and a Civil War re-enactment by the 67th New York Volunteers.
Posted by Rick Jackofsky at 6:54 PM No comments: