I was ramblin' through some old Mp3 files on my computer and found this solo banjo piece from our first CD Blind Dog Thumpin' on the Porch (2000). It's called Ramblin' Hobo. I learned it from the playing of Doc Watson and his father-in-law Gaither Carlton. This "little ditty" is a cool tune in an odd F tuning (fCFCD). It's easy to get into this tuning from double C, just drop the two G strings down to F.

Ramblin' Hobo, to me, personifies the unique (and sometimes strange) percussive, melodic, rhythmic, and harmonic qualities of old time banjo. Playing the banjo can be a grand adventure in self expression and artistic freedom. This song lends itself perfectly to the type of individual interpretation that makes playing the banjo so much fun. It's like a puzzle whose pieces can be rearranged to form different pictures. . .  There I go ramblin' again.

Posted by Rick Jackofsky at 7:07 PM No comments:

A Thanksgiving Prayer - Thank You Song

We had a great time playing out in Montauk last night. I'd like to thank everyone for coming out to see us and we sure hope to see y'all again real soon.

Here's a little Thanksgiving prayer I wrote sometime around 1990. This was a totally unrehearsed moment captured on "tape" by Larry Moser. We included it in our 2004 CD release "Rock Hollow."

Thank You Song by Rooster Rick
Happy Thanksgiving from The Homegrown String Band!
Posted by Rick Jackofsky at 4:36 PM No comments:

The End is Near!

As we near the end of our 15th year performing professionally as a family we will be heading out to the historic town of Montauk, near the end of our 110-mile-long Long Island. The Homegrown String Band (full Quadrupelo) will be performing at The Montauk Library from 7:30 - 9 pm on Saturday, November 19th. Come on out and have a relaxing evening with Long Island's "First Family of Folk" before all the holiday hub bub begins.

The Montauk Library is located on Montauk Hwy. (Route 27) just east of the village of Montauk, on the north side of the highway, as indicated on the map below. 631-668-3377 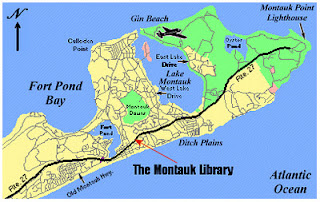 Posted by Rick Jackofsky at 12:19 PM No comments:

Here's a creepy murder ballad I played the day before Halloween at The Bayport-Blue Point Library in Bayport, NY. Before I sang the song I told the tale of Willy, The Cruel Ship's Carpenter, and the ghost of Pretty Polly who's undead spirit sought justice for herself and her unborn child. Freddy Krueger had nothin' on this murderous 18th century villain.