This Saturday, November 2nd, we will be performing, as a Quartet, at The Roxbury Public Library in Succasunna, New Jersey. The show starts at 1:30 pm and runs to 2:30 pm.

Join The Homegrown String Band™ on a musical journey that explores the oral traditions of American music from the ancient ballads of the British Isles to the blues, bluegrass and folk of the twenty-first century.

Posted by Rick Jackofsky at 4:56 PM No comments: 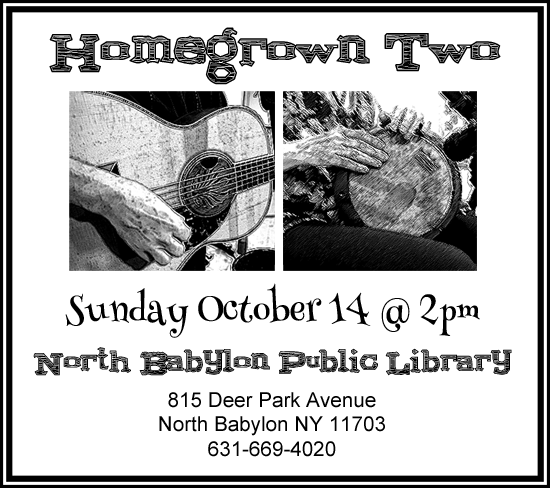 Posted by Rick Jackofsky at 11:10 PM No comments:


This weekend HG3- The Homegrown Trio will be trucking down to Pennsylvania to do a Saturday evening show at The Darlington Arts Center in Garnet Valley PA and then a quick turnaround for a Sunday afternoon quartet set at The Greenport Fall Folk Festival . The folk festival takes place at Mitchell Park in Greenport and is free to the public. The festival begins at 2pm, our set starts at 5pm. The show at The Darlington Arts Center is the season opener of the Coffeehouse Concert Series. Opening act at 7:30 and we go on at 8 pm. Tickets are $10 for members and $15 for non members. Free coffee, tea and deserts, (BYOB, corkscrew and glasses provided.)

Posted by Rick Jackofsky at 9:48 PM No comments: 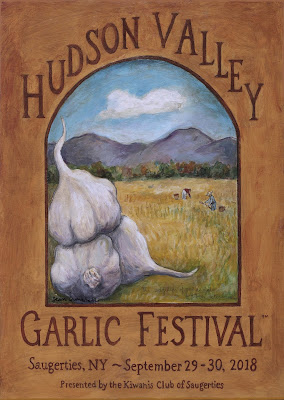 Once again it's time for the big Hudson Valley Garlic Festival in Saugerties, NY. This is an event not to be missed. The biggest and best garlic festival on the East Coast.  55 garlic farmers will be providing lovers of "The Stinking Rose" with a wide variety of garlic to sample and purchase.  Come hungry and wear your dancing' shoes, 'cause there will be ten acts performing on five stages throughout the weekend, a wide selection tasty foods to eat while your there and delicious prepared foods to take home. The kids will love the children's activity area, the wandering One World Puppetry performers, and The Arm of the Sea Theater stage. Don't forget to stroll through the craft area to do some early Holiday shopping.

The Homegrown String Band will be performing three sets each day on The Pavillion Stage right in the middle of the festival in front of the food pavilion.

Posted by Rick Jackofsky at 3:00 PM No comments: 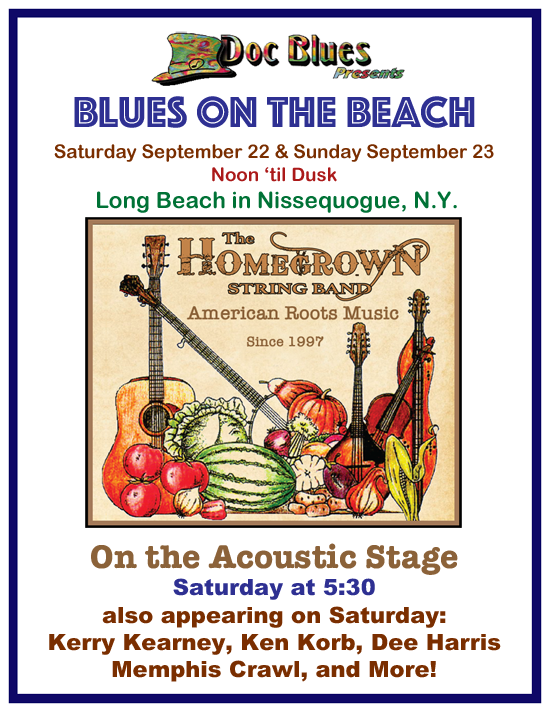 Remember the Cedar Beach Blues Festival? Well Long Island blues impresario Mark Gresser, AKA Doctor Blues, is bringing it back to the North Shore of Long Island. This year the Blues on the Beach Festival will take place on Long Beach in Nissequogue, N.Y. Saturday, September 22nd &  Sunday, September 23rd. Twenty eight bands will be performing on two stages over the course of the weekend. The music starts at noon each day. The Homegrown String Band will be performing on the Acoustic Stage on Saturday at 5:30. Other acts on the Acoustic stage include Ken Korb, Dee Harris, and The Deal. Saturdays Electric Stage will feature Kerry Kearney, Lex Grey, and Memphis Crawl.

This festival has been going on for 27 years and has been, and still is, a great chance to get together with friends and hear the best blues and roots music Long Island has to offer. 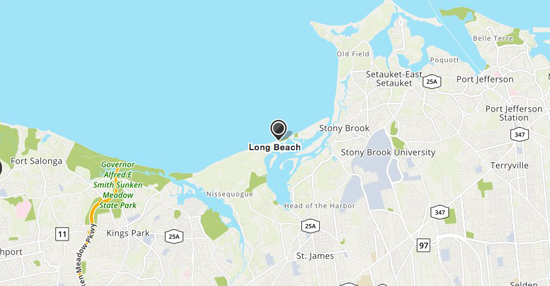 Posted by Rick Jackofsky at 7:01 PM No comments: 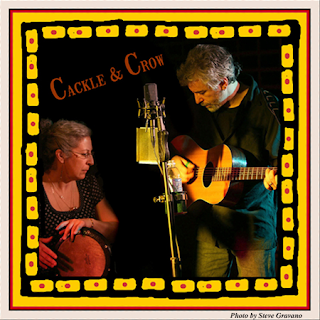 Homegrown Two, the duo will be performing a midweek, mid afternoon, show at The Montville Township Public Library, in Montville, N.J. at 1pm on Thursday, September 13th. We'll be performing a blend of original and traditional acoustic American roots music with; banjo, guitar, ukulele, harmonica, doumbek, and dulcimer. 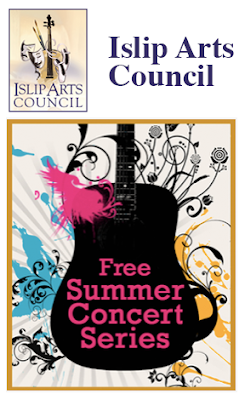 Join us Sunday afternoon at 2pm for a concert on the grounds of the beautiful Bayard Cutting Arboretum in Great River, NY. The show will be at the boathouse down by the river. Bring your own blanket or lawn chair and get there early to get good spot. Last year we heard people were turned away, so don't delay! The concert is free, but there is a parking fee. This concert is the final show of the season for The Islip Arts Council's 2018 Summer Concert Series.

Posted by Rick Jackofsky at 5:57 PM No comments: 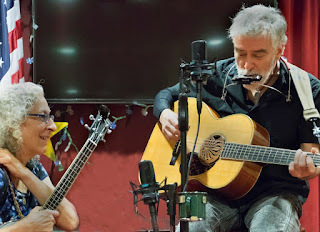 HG2, the Homegrown Duo of Rick & Georgianne will be performing at The Hackettstown, N.J. Free Public Library from 6:30 pm to 7:30 pm on Thursday June 28th. Free Show!

photo by Dave Blinder
Posted by Rick Jackofsky at 2:35 PM No comments:

It's that time again! Summer starts on Edwards Farm Day. Come on down to the farm on the corner of Edwards Street and Foster Avenue in Sayville, NY for a great day of family fun.

"An afternoon on the Edwards Farm . . . will feature hands-on activities including quilting, grinding corn, making ice cream, and seed planting along with baby farm animals, spinning and weaving demonstrations as well as music by The Homegrown String Band. To help defray expenses, admission is $4.00 per person, $15 for a family of four, $2.00 each additional person over 2 years of age."
Posted by Rick Jackofsky at 10:23 AM No comments:

On Sunday, February 18th, at 2 pm; we, (The Homegrown String Band), will be bringing our unique brand of acoustic American music and dance to the Connetquot Public Library in Bohemia, New York. The show is free and open to the public. Come on down and help us celebrate 21 years of performing our old, new, borrowed, and blue, high energy American roots music. 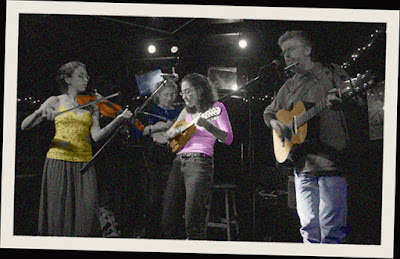 "The Family That Plays Together" - photo by Steve Gravano

Posted by Rick Jackofsky at 9:33 AM No comments: 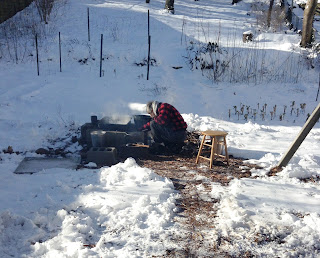 Wed. Jan. 31, 2018 - Day 1, Year 6:
I tapped seven trees last Wednesday January 24th, the earliest I've ever started my backyard sugaring. Today, one week later, I started boiling. This was not only the earliest I've boiled but also the coldest day I've spent hunched over my homemade evaporator. I brought three buckets of, mostly frozen, sap inside the night before so I would have some warm liquid to start with. I started the fire at 7am, (the air  temperature was 18 degrees) by 7:30 I had a good boil and by 4:30 I had boiled 30 gallons of sap down to 2 1/2 quarts of syrup. 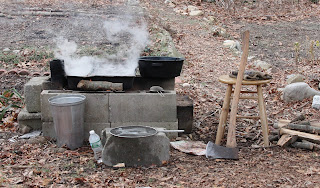 Thurs. Feb 15, 2018 Day 4, Year:
I picked up some good sized oak branches the power company left along the roadside last summer. They had been lying on the ground throughout the fall and winter, so they were fairly wet. I cut them up, split the bigger ones, and stripped the bark and wet sap wood. Once I had a hot fire going I warmed them up around the edges of my evaporator. It took a couple hours to get a strong boil, but I managed to cook up another 2 quarts plus a cup of syrup over another ten hour day. I'm done. Nine and a half quarts of syrup, 120 gallons of sap, and 41 hours of boiling.

Posted by Rick Jackofsky at 8:51 PM No comments: