Well, it's "Black Friday" and the holiday season is upon us. A lot of people are hoping the economy will come out of it's funk and people will get out and shop. A company rep who used to call on me in my photo shop once said "Christmas is God's gift to retail." So much money is spent in the days between Thanksgiving and New Years. A lot of the buying is folks purchasing things that they would have bought anyway, but some of it is just frantic buying, looking for gifts for people who don't really need anything. If you have a "man (or woman) who has everything" on your shopping list consider making a purchase from, or a donation to, a cause that will help out the "man (or woman) who has nothing." Many businesses are struggling with economic downturn, so go out and buy what you need, but don't forget the charities who have also been hit by hard times. There are lots of places that sell gifts and donate all or part of the proceeds to charity. For those people who have everything you can make a donation to a cause in their name. One place we have given to over the years is Heifer International, a charity that has been around since 1944. Their philosophy is it is better to teach a man how to fish than it is to give him a fish. You can donate various amounts that can go toward the purchase of anything from a flock of chickens for an African family to a llama for a Peruvian weaver. They in turn are required to pass on the gift by donating the first offspring to a neighbor in need (viral charity!). Your gift recipient gets a nice card and you both get that warm fuzzy feeling you get when you do something nice for someone you don't know.


"This simple idea of giving families a source of food rather than short-term relief caught on and has continued for over 60 years. Since 1944, Heifer has helped 8.5 million people in more than 125 countries."
Heifer Project International, 1 World Avenue, Little Rock, AR/USA 72202
Tel.: (800) 422-0474
Happy Holidays from the Homegrown String Band
Posted by Rick Jackofsky at 6:18 PM 2 comments:

ZenPro Audio is owned and operated by musician/engineer Warren Dent; the equipment he carries in his online store is top shelf audio gear personally selected and recommended based on his own recording experience. I don't have a recording studio and thus don't have a need for much of his high end equipment, but I am always looking for ways to improve the live sound of The Homegrown String Band. The key to our success has been "keeping it real." Keeping our performances down to earth involves interacting with our audience while maintaining a relaxed and sincere performance style, as well as preserving the natural sound of our acoustic instruments. (We have pickups we can use but only as a last resort.) To my ears, the beauty of acoustic music has to be captured, in the air, by high quality microphones. That's where Warren comes in. I've purchased two very reasonably priced high quality mics from him in the past six months.

About twelve years ago we started using a one mic set up, gathering around an AT 4033 (recommended by Del McCoury). Two years ago we added a second AT 4033 to our main stand and a Shure SM 57 on a separate stand for Mama Georgianne's dulcimer and doumbek. The new set up allows us to get closer to the microphones, which improves the sound quality and increases the volume a bit while remaining unplugged. This summer, in an effort to boost the volume of the guitar and mandolin, I decided to add a third mic to our front line. I thought I already had the perfect mic, an old AKG C1000, but that microphone seems to have vanished, either left behind at a gig or got up and walked away, who knows. Anyway, I started using a Shure 545SD, which was working pretty well, but I thought a small diaphragm condenser mic might be better. I contacted Warren at ZenPro and sent him a list of mics I was considering. He quickly responded and suggested the CAD M179, a large diaphragm condenser with dial in pick up patterns. WOW, this mic is great! It grabs the sound from the guitar and sends it pure and unadulterated through the PA and out to the audience. I never would have even considered this mic if not for Warren's recommendation.

Oh, did I mention the quality of ZenPro's service? I received the mic within 48 hrs, free shipping, a free xlr cord, and, get this, a bag of roasted coffee beans!  If you read my last post you know how I love my coffee!

"ZenPro Audio is owned and operated by me, Warren Dent. I have family and friends who assist me to keep things running as smoothly as possible, so most things here would be referred to as "I" but there is a "we" involved in many aspects of this operation. I'm the guy who decides what lines to carry, and most times that reason is because I have used the gear in the studio and realize it has value. We can assist you in your purchase and recommend the right products for you, not based on profit. I am not a low pressure guy, I am a no pressure guy. I have found happiness in ZenPro Audio and it is my goal not to just treat you "fair", but to go above and beyond to make it the greatest gear buying experience on Earth for YOU."  - Warren Dent / Owner

In these days of megastore monopolies it's refreshing to do business with a guy like Warren Dent. If you're in the market for any quality recording or live sound gear check out ZenPro Audio.
Posted by Rick Jackofsky at 1:28 AM 1 comment: 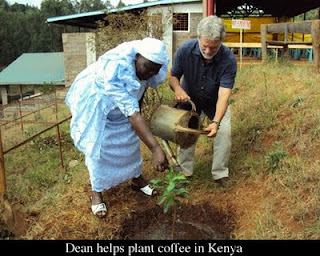 My name is Rick and I'm addicted to coffee. I start every day with a cup of fresh ground organically grown coffee. I'm not talking about four dollar a cup boutique blends. I grind my own with a hand cranked coffee mill, I don't pay ridiculous prices, and the money I pay isn't ending up in the pockets of some huge corporate agricultural conglomerate. The supplier for my habit is Dean's Beans, run by a fellow from Massachusetts by the name of Dean Cyon. This coffee crusader travels the world in support of social justice and ecological responsibility, searching for the perfect cup of certified organic fair trade shade grown coffee all the while teaching third world indigenous farmers how to use organic farming methods and market their product. All the coffees sold by Dean's Beans are the product of sustainable agriculture methods and the growers are fairly paid for their crop. Dean has documented some of his travels in his book "Javatrekker: Dispatches from the World of Fair Trade Coffee," which won an award from the Independent Publishers Association for best travel book. This is a five star company that provides a quality product at a fair price (mostly $7-$8 a lb.) while doing the right thing.


"We only purchase beans from small farmers and cooperatives, largely made up of indigenous peoples working hard to maintain their culture and lifestyles in a hostile world. We do not buy beans from large estates and farms. We've been there, and have seen the conditions of chronic poverty and malnutrition within which these farms produce those other coffees. Look in your kitchen—do you know where your beans come from?"

Dean has a wonderful selection of light, dark, light/dark blends, espresso, decaf, and flavored coffees, all with inventive names like Ahab's Revenge, Obama Rama, Aztec Two Step, Monkey Knife Fight and Rattle Snake Gutter Brew. Dean's coffee is always freshly roasted and packed with flavor, but if you want an even fresher brew you can  buy unroasted green beans and the equipment to roast them at home one cup at a time!


"Dean's Beans only purchases beans from villages and importers that are committed to Fair Trade and working towards better economic opportunity, improved health and nutrition in the villages. We are proud to be a founding member of Cooperative Coffees, Inc., the first roaster's cooperative created to buy direct, Fair Trade coffee from farmer coops, and make it available to any small roaster who wants to participate in the Fair Trade movement. We are also active members of the Fair Trade Federation, an international organization of dedicated Fair Traders (no poseurs allowed)."


Dean also sells organic fair trade sugar and chocolate. His chocolate covered java drops have kept me awake on many an overnight road trip allowing me to drive through the night so I could get home to my morning cup of Rattle Snake Gutter Brew.

The Homegrown String Band is powered by Dean's Beans
You should be too!