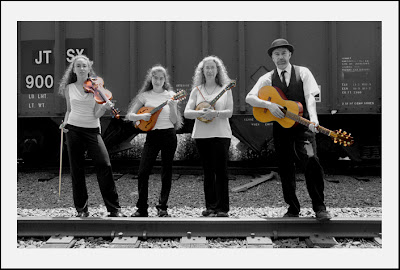 The Homegrown String Band has always been about blending the old with the new. For the last 15 years we have been performing a mix of original songs along with original arrangements of traditional American music. Throughout our performing career the unique approach we take, to what is essentially traditional music, has gone in and out of fashion. Our music has alternately been embraced and shunned by the gate keepers of various musical genres. We try to remain true to tradition, not being influenced by musical fads and fashions, while also being open to change and evolution. American music is all about cross pollination and the exchange of ideas. The Carter Family,  Charlie Poole, Jimmie Rodgers, Bill Monroe, Hank Williams, Chuck Berry, Elvis Presley, Bob Dylan, and  Jerry Garcia were all people who added their own ideas to the canon of traditional American music. Some people  may choose to latch on to the music of an individual, a musical genre, or a particular stylistic era, believing that a particular style and or instrumentation are the ultimate and final word handed down by the musical gods; we believe in continuing revelation.
Photo by Steve Gravano
Posted by Rick Jackofsky at 1:16 PM 1 comment: 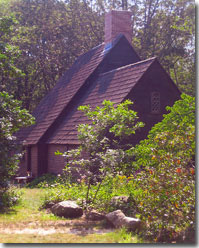 On Wednesday, July 27, 2011, at 7:00 pm the Homegrown String Band will be presenting a free outdoor concert at the Jonathon Bourne Public Library in the historic town of Bourne, Massachusetts. Though the town wasn't officially incorporated until 1884 the area had been an important gathering place for centuries before. In 1627 the Pilgrims established the Aptucxet trading post on a site known as Manamet, "trail of burden carriers," by the native peoples. Today the town situated on Buzzards Bay is known as the gateway to Cape Cod.
On Thursday, July 28, at 7:00 pm the band will be playing a free indoor show at the Oliver Wolcott Library in Litchfield, Connecticut. The OWL is named in honor of Declaration of Independence signer Oliver Wolcott, a brigadier general of the Connecticut Militia during the American Revolution, and former governor of Connecticut.
Posted by Rick Jackofsky at 9:49 PM 1 comment: 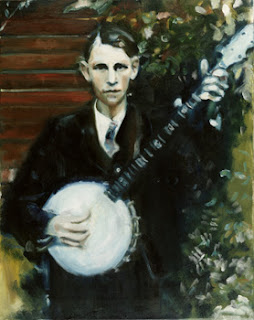 A few years ago we (The Homegrown String Band) were playing at a bluegrass festival headlined by David Grisman. I found a beautiful water color like print of a famous photo of the Carter Family at his merchandise table. I couldn't resist. I bought the print, framed it, and hung it up in my music room right next to an 8X10 photo of Tommy Jarrell and Fred Cockerham given to me by the late Ray Alden. The painting was made by Tracy Bigelow Grisman; a talented artist and musician from Petaluma, California . She has a web site, called OldtimeyArt.com, where you can see and purchase her beautiful prints of old-time country and jazz musicians.


Last week I was rummaging through eBay, looking for banjo ephemera, and I came across an auction for an 11X14 print of Charlie Poole done by Tracy. I won the auction and Charlie is now hanging with the Carters in my music room. I hope the Carters don't mind hanging out with this hard drinking rounder from North Carolina; Maybelle put up with Johnny Cash so I guess she'll be OK with Charlie. While the Carter Family advertised their shows as wholesome and "morally good;" Charlie Poole was at the other end of the spectrum. This hard drinking millworker made his own whiskey and played with his band, the North Carolina Ramblers, at speakeasies, mining towns, and lumber camps around the Piedmont area. Like the Carters, Charlie was an innovator, blending traditional mountain music with the popular music of the day. His three finger banjo picking was a precursor to the bluegrass banjo style made popular by Earl Scruggs. The music of Carter Family and the North Carolina Ramblers laid the foundation for the bluegrass bands of the 1940s and 1950s—and the Homegrown String Band.

Read about the musical contributions of Charlie Poole and other Piedmont textile workers to the development of American roots music.
Linthead Stomp: The Creation of Country Music in the Piedmont South

Posted by Rick Jackofsky at 5:42 PM No comments:

On Tuesday, July 19, 2011, The Homegrown String Band will be returning to the ocean resort town of Lewes, Delaware. Located on the Delmarva peninsula, the city of Lewes (pronounced Lewis not Lews) was founded by Dutch colonists in 1631 and is known as the First City of the First State. The concert is free and starts at 7:00 pm in beautiful Stango Park.
Posted by Rick Jackofsky at 2:13 PM No comments: 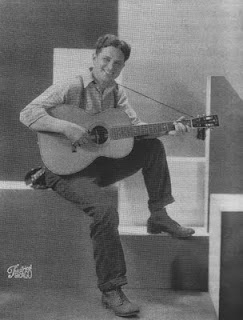 Today would have been Bradley Kincaid's 116th birthday. Born on July 13, 1895, in Garrad County Kentucky, the boy who learned how to play guitar on an instrument acquired in trade for a foxhound would eventually become known around the world as "The Kentucky Mountain Boy." In 1926, Kincaid made his first appearance on the WLS National Barn Dance radio program in Chicago. Originally booked by the station, which was owned by Sears Roebuck (the "World's Largest Store"), as part of a college vocal quartet, Kincaid was soon given his own time slot to sing his repertoire of Kentucky folksongs and ballads. He stayed at WLS for four years before moving on to other radio stations around the northeast. Kincaid published a popular song book called Favorite Mountain Ballads and Old Time Songs, which he  promoted and sold on air. He also recorded 95 songs, including the first commercial recording (2/27/28) of  Child Ballad #84 – Barbara Allen.

Pickin on a Park Bench


I guess pickin' in the park is the modern urban/suburban version of front porch pickin'; an opportunity to get out, get some fresh air, and share your music with your neighbors. One of my fondest memories of growing up on Long Island was our Sunday summer excursions into NYC during the mid to late 1960s. My dad would load the family up in the station wagon for an hour long drive into Manhattan. Once we got into "The City" we would head down to Greenwich Village, wander around the shops and art galleries, and listen to the city folk playing blues, jazz, and folk music in Washington Square. The day would usually end with dinner at Jimmy's, our favorite Chinatown eatery.
In this video I'm playing the classic American folk ballad "Wild Bill Jones" in clawhammer style on my Wildwood five string open back banjo. I guess "Wild Bill Jones" falls into that ever popular murder ballad category I mentioned in a previous post. A version of the song, as sung by Viney Norton of Big Laurel, North Carolina, was collected by Cecil Sharp in August of 1916. The first commercial recording was made in New York City on April 24, 1924, by Eva Davis, accompanying herself on the five string banjo, of course.
Posted by Rick Jackofsky at 2:37 PM 1 comment: