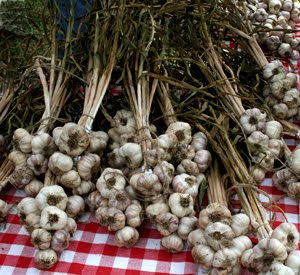 In 1989, Pat Reppert, AKA The Goddess of Garlic, a Hudson Valley herb farmer (Shale Hill Farm and Herb Gardens) organized the first Garlic Festival held in the Hudson Valley—and perhaps on the first on the East Coast. The Hudson Valley Garlic Festival, a celebration in honor of "the stinking rose," has been a Homegrown String Band fall favorite for the last 4 years. Every year we look forward to the food, music, crafts, and good people we will be enjoying on the last weekend of September in Saugerties, NY. This festival is a real class act; everything about it is top notch, and it's no wonder up to 50,000 garlic lovers from around the country attend each year. The weather was not great this year, but the festival was still very well attended. As usual, we came home with 15 or 20 lbs. of various varieties of organically grown garlic, including some seed garlic that I'll be planting in the next few weeks. If you attend the HVGF you will be able to sample an amazing array of garlic and garlic-flavored products like roasted garlic, garlic ice cream, garlic pretzels, chocolate covered garlic, garlic scape guacamole, garlic salsa, and garlic shots (better than flu shots!), as well as 10 bands performing, everything from bluegrass to zydeco, continuously on 5 stages scattered throughout the park. Be there in 2010, we will!

Fun in the Sun: Solar Powered Sound & Music Blowing in the Wind 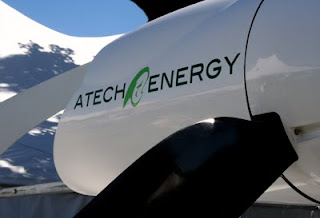 We just got back from a three day "mini tour" of New Jersey and Pennsylvania. We performed at libraries in Princeton and Flemington NJ and at the Pennsylvania Renewable Energy and Sustainable Living Festival in Kempton PA.  At the Energy Festival we played on a really cool, solar powered stage with sound provided by Crow Weaver. His solar collectors, batteries, and DC powered amps provided enough power to fill the air with music throughout the day. Crow also played sax, guitar, and flute with his band, The Native Earthling Band, an eclectic outfit that performed jazz, rock, folk, and jamband music. All in all it was a great day, beautiful weather, good music, children's activities, vendors selling organic food and produce, crafts, native plants, and, of course, wind, solar, and other alternative energy products. Throughout the day lecturers provided festival goers with information on the politics, economics, and technologies of alternative energy and sustainable living. The day was capped off with a performance by saxophonist Paul Winter and the Makoto Taiko Japanese drummers. All in all this was a really nice and very well run little festival.
Highly recommended by The Homegrown String Band
"A 100% Natural Organically Grown Family Band"
Posted by Rick Jackofsky at 11:50 AM 1 comment: 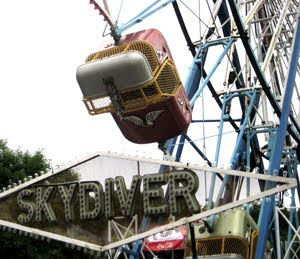 This weekend we had a great time playing at the Altoona First Festival. The festival was held on the grounds of an historic amusement park, Lakemont Park, in Altoona PA, which opened in 1894. It was one of those gigs where our music becomes part of a larger soundscape; kind of like participating in a Charles Ives symphony. Our music became part of a mosaic of sound that included carnival barkers, fire eaters, jugglers, a roller-coaster, monster truck rides, etc. Performing at an event like this is more like busking on the street than playing in a concert setting; the audience is transient, you have to keep the energy level high to attract and hold their attention. One thing we were able to take advantage of was the fact that the seating in front of our stage was the closest place woozy riders could sit to regain their equilibrium after disembarking from the Skydiver; a ride that looked like the ferris wheel from hell; cars spinning around as the wheel turned at a disturbingly high rate of speed. One of the perks of performing was free ride tickets. Georgianne and I decided to skip the rides, Erica enjoyed the Monster Octopus while Annalee said the Merry Go Round was more her speed. Maybe next time I'll try the Skydiver. If you ever find yourself in the Altoona area during the summer months be sure to stop in and visit with the good folks at Lakemont Park; a real old fashioned amusement park.


Follow the wild and crazy ride of The Homegrown String Band here and at:  www.homegrownstringband.com

Little House in the Megalopolis 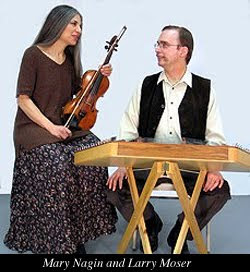 Today three-quarters of The Homegrown String Band took a field trip. Rick, Georgianne, and Annalee visited the Old Bethpage Village Restoration, a 19th century living history museum here on Long Island, to take in the oldtime baseball and music festival. We watched baseball players (I don't think any of them were millionaires) playing without gloves and musicians (no millionaires here, either) playing without microphones. It was a beautiful day and a refreshing and relaxing break from the 21st century. Our good friends Larry Moser and Mary Nagin were set up on the green in the center of town performing 19th century tunes and songs on hammered dulcimer and fiddle. I especially enjoyed "Sackett's Harbor," a War of 1812 era instrumental. After a short break the duo provided the music for some community dancing as Chart Guthrie (with some help from Amazin' Annalee) called dances and led folks through some beginning contras. After the dance the string musicians gave way to a concert by a Civil War era brass band.

We visited a decoy carver, a tavern, a general store, several farm houses and a hat maker before settling down at the one room school house where fiddler Eric Martin was entertaining folks with bad jokes and excellent fiddling. He was joined by two young men; Sean, who sang in a powerful tenor voice, and Richard, who backed up Eric on harmonica. I wish I had my camera to capture the scene when Richard, a young teen, accompanied Eric, who is probably 40 years his senior, on a spirited version of "Swing Nine Yards of Calico" by tapping a rhythm on the fiddle neck with two wooden knitting needles (while Eric fiddled) and played the harmonica with no hands (and no rack).

I remember coming to the Old Bethpage Village the first year it opened in the early sixties. Sadly, it has been a constant struggle for local governments and historical societies to keep the site up and running. Unfortunately in this day and age of blaring music, flashing lights, and non stop movement, a quiet look into the past isn't a big draw. At one point during his performance Eric asked audience members where they were from. When one audience member responded Massapequa Eric asked if she knew the Native American meaning of the town name. When she responded negatively, Eric told her it means  "Let's go shopping." Ah, America's favorite pastime has ancient roots. So many things to buy and so little time to learn from our past.
Posted by Rick Jackofsky at 9:51 PM 1 comment: 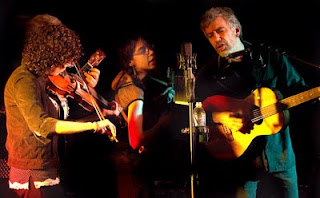 
A song that has moved in and out of The Homegrown String Band's repertoire, "The Cuckoo" is really an old English folk song that made its way to America in the memories of early American colonists. The song found a home in the southern Appalachians where it entered the oral tradition of the mountain folk. Over time verses were added and dropped and the song developed a distinct American character. Cecil Sharpe documented several mountain versions of "The Cuckoo" during his Appalachian song catching expeditions between 1916 and 1918. The seminal American version of the tune is Clarence Ashley's 1929 Columbia recording, which helped restart Ashley's music career when it was included on Harry Smith's Folkways 1952 "Anthology of American Music." English folk rocker Richard Thompson's version, clearly influenced by Ashley's recording, shows how folk music continues to evolve by moving back and forth across the Atlantic. Listen to a live performance of "The Cuckoo" by The Homegrown String Band recorded at the Stone Soup Coffeehouse, by visiting our website www.homegrownstringband.com

Posted by Rick Jackofsky at 4:36 PM No comments: